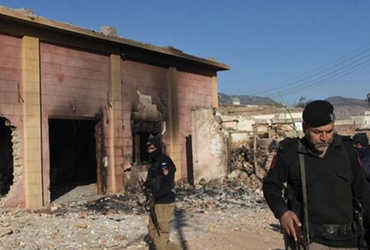 (PTI) New Delhi / Peshawar, Ta. 1
A Hindu temple was demolished by radical Muslims in Terry village in Karak district of Khyber-Pakhtunkhwa province, Pakistan. The Hindu community of Pakistan then demanded action against those responsible. The Supreme Court of Pakistan also criticized the incident and suggested that the temple be constructed.
Khyber-Pakhtunkhwa Chief Minister Mahmud Khan expressed grief over the incident during a function. The Chief Minister said that the responsible fundamentalists are being arrested and immediate action will be taken against them. The Chief Minister arrested Hindu organizations and announced that the government would rebuild the temple.
Mahmud Khan said that it was not appropriate to target people of minority religion and their places of worship in this way. Their state government will take appropriate action on this issue. Police arrested a total of eight fundamentalist Muslims, including Rahman Salam, the leader of the radical political party Jamiat-ul-Ulema-e-Islam. The Chief Minister said that the State Police has registered a case against 30 people and action will be taken against all of them.
On the other hand, the Indian Ministry of External Affairs has also approached the Government of Pakistan on this issue. Foreign Ministry officials have sent a notice to the Pakistan High Commissioner in New Delhi. In a presentation to the High Commissioner, India condemned the incident and demanded immediate action against those responsible. India has also said that Hindu temples and Hindu communities have been targeted in Pakistan since the 19th century. Giving information about this, India gave the slogan of the demolition of the Hindu temple.
It is notable that Ramesh Kumar Wakwani, President and Hindu leader of Pakistan Hindu Council, leader of Minorities Commission, Dr. Leaders including Sudal had approached the Chief Justice of Pakistan on the issue. The matter will be heard in the Supreme Court on 9 January.