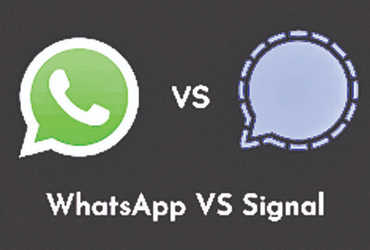 WhatsApp has been rolling out a new policy since February. Accordingly, WhatsApp will share its data with its parent company Facebook. Facebook is notorious for not keeping data secure. WhatsApp has not yet put up a special privacy issue, but it could be dangerous for users if WhatsApp’s data starts being passed on to Facebook. Because it has been proven time and again that data in Facebook is not secure.

On the other hand, WhatsApp is the most popular app in the world, so people use it by running WhatsApp’s grandfather. While there are few applications in the market as its substitute, the strongest option is Signal. An app called Signal provides a messaging feature similar to WhatsApp. Following the WhatsApp controversy, Signal tweeted that if users use us, we will not share data with anyone.

Signal said nothing about leaking data directly to Facebook and not leaking any data to Facebook without saying anything about WhatsApp being leaked without any data. Tesla Motors founder and researcher Elon Musk also announced that he would use Signal instead of WhatsApp. Then millions of people worldwide started downloading signals. With this the signal server was also blocked.

WhatsApp vs Signal Jung debuted on Twitter. Many technology experts wrote that the signal is far more secure than WhatsApp. It is safe now, but in future, if consumption increases, it will also start a mess like WhatsApp. One of its original founders, Brian Act, resigned after WhatsApp bought Facebook. He has co-founded the Signal Foundation with Moxy Marlinspike. Whose app signal is becoming popular right now.

Trying to get fast consent from whatsapp

In social media, websites, mobile applications, online services, consent of users is required. In Europe and America, privacy laws are very strict, in India they are not so strict and in some cases there are no laws at all. So WhatsApp is now sending a notification to the users that if you do not accept our condition by the 3rd, we will delete the account. This is a direct threat to WhatsApp. Services, including free WhatsApp, make huge profits by selling users’ data. However, common users are not too concerned about user data. But if the threat of WhatsApp is reduced today, it is certain that its behavior will become more furious in the future. The controversy over WhatsApp has increased since the 2014 purchase of WhatsApp in 2014 16 billion, as neither Facebook nor its founder Mark is fundamentally reliable.