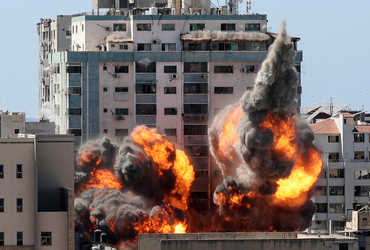 Israel has been carrying out airstrikes on Gaza. Today, Israel once again rocketed a tall building in the city of Gaza. Which led to the demolition of the multi-storey building. The special thing is that inside this building there were offices of many international media houses. The building housed offices of several news agencies including the Associated Press (AP) and Al Jazeera.

Israel warned about an hour ago that media personnel should leave the building as they were about to attack. After warning, all the media persons left from there. No casualties were reported in the incident. It is learned that during his fight with Hamas, Israel was informed that some terrorists were hiding in the building. They then fired rockets at the building.

People were ordered to evacuate the building within an hour of the warning. Several rockets were fired one after the other and the building was demolished. There is no explanation from Israel yet.

Earlier attacks in Gaza city killed at least 10 Palestinians, mostly children. This is the highest number of people killed in Israeli attacks since the war started against extremist Hamas rulers in Gaza.