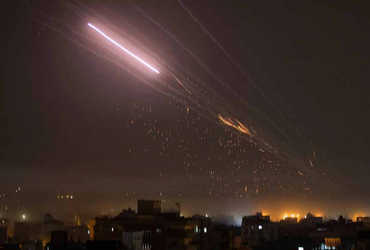 Gaza, Ta. 13
A bloody battle has erupted between Israel and the pro-Palestinian extremist group Hamas. At least 150 Palestinians have been killed in Israeli air strikes so far. The Israeli military claimed that several commanders had been killed.
Ambassadors from Egypt and the United States negotiated a ceasefire. In particular, the Egyptian delegation first spoke to Hamas and then Egypt on this issue. A one-day ceasefire was proposed by both sides, but Israel declined the offer and continued several airstrikes.
Israel cleverly deployed Hamas commanders into the tunnel and called for its end. Israel campaigned in the media that the Israeli army would fight Hamas from the ground up. Hamas troops were then deployed in an underground tunnel to eliminate Israeli troops in between.
Israel then launched an airstrike and dropped several bombs. In which Hamas soldiers were crushed. Israel claimed that several commanders were killed. But Hamas said only 20 commanders have been killed.
So far more than 150 people have been killed in Israeli airstrikes. These include 21 children and 20 women. People living near the Gaza Strip started migrating. So far 20 people have been seriously injured. So far six Israeli civilians have been killed in the Hamas rocket attack.
On the other hand, in Israel, security forces showered bullets on Muslim civilians supporting the Palestinians. In which 11 civilians were killed.
It is estimated that more than 5,000 rockets have been fired from both sides so far. The Israeli military says Hamas has fired 500 rockets at Israel. Many of these were actually blown into the air.