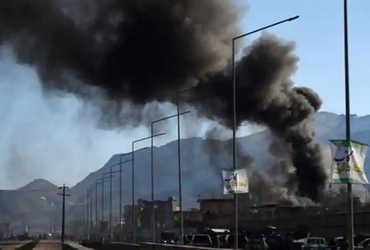 Kabul, Ta. 13
IS militants fired rockets at an American airbase in Bagram, Afghanistan. A NATO statement said that fortunately there were no casualties in the five rocket attacks. A total of 12 rockets were used in the attack, of which seven were neutralized.
A spokesman for the Afghan government said the rocket fell on the American airbase at Bagram. The bombing occurred shortly after noon in front of the US military base. The militants were to fire a total of 13 rockets, but seven were seized and defused. The terrorists fired five rockets.
The US airbase at Bagram was attacked by five rockets, with no casualties. A NATO spokesman said there was no major damage to the airbase.
Earlier in April, IS militants fired five rockets at an American airbase. Even then there were no casualties. The airbase was slightly damaged. IS attacks in Afghanistan have increased in the last few months. Since the talks between the Taliban and the Afghan government began, IS militants have carried out several attacks.