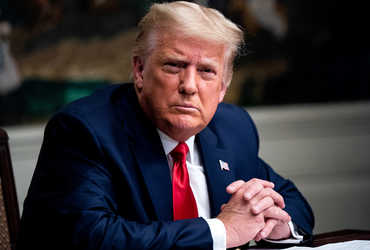 After the attack on US Congress by Trump supporters, Trump has been criticized from all sides. On the one hand, US lawmakers and governors demand that Trump be removed from the presidency. On the other hand, an Iraqi court has issued an arrest warrant in Trump’s name. Last year, a warrant was issued against US President Donald Trump regarding the assassination of the Iranian general and influential militia leader. Iran has already issued warrants against Trump.

The court told the media that a warrant was issued by a judge of the Baghdad Investigation Court in the case of the deaths of General Qasim Suleimani and Abu al-Muhandis in the US drone attack. Sulemani and Muhandis were killed in a drone attack outside Baghdad Airport in January last year. It also created a political crisis between the United States and Iraq. A warrant has now been issued against Trump on the murder charge.

After the duo’s death, Iran’s supreme leader Ayatollah Khamenei called them a martyr and asked for revenge. Ayatollah Khamenei wrote on Twitter that we pay tribute to the souls of Abu Mahindra and Sulaimani. He was the prime example of a man trained in Islam. He devoted his entire life to Allah.