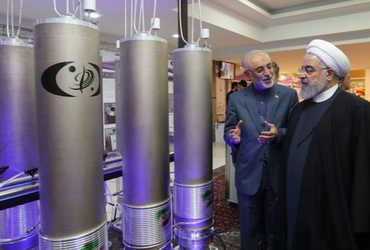 Dubai, Ta. 2
Iran will accelerate its nuclear program by increasing its uranium enrichment by 20 percent. Concerns for the world have increased as Iran is increasing its uranium reserves. The nuclear agreement provided for Iran is capable of storing 7.5 percent of uranium, but Iran has been working to increase its uranium reserves since the agreement was broken.
A nuclear site has been developed in Fordo, a small village about 30 kilometers from the Iranian city of Kom. Iran has built a large building at Fordo and is running a nuclear program under it. Now, an Iranian government official has claimed that the process of making nuclear weapons with 80 percent uranium is in full swing.
Iran signed the nuclear deal in 2012 during the Obama administration. Iran was allowed to increase its uranium enrichment to a maximum of 7.5 percent.
According to the agreement, Iran can store 202 kg of uranium, but the International Atomic Energy Agency estimates that by the end of 2020, Iran has 8 kg of uranium. Ali Akbar Salehi, the head of Iran’s nuclear program, revealed in an Iranian television program that Iran’s nuclear program would be a significant success as it increased its uranium enrichment by 50 percent.
The head of the nuclear program threatened that Iran would now be in a situation where the push of a button would make the enemy countries tremble. Iran’s uranium enrichment is expected to reach 70 percent.
Significantly, the possibility of mysterious activity has started after Iran built an underground nuclear site at Fordo, 20 km from the city of Kom.