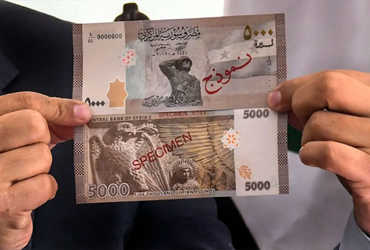 Inflation has soared in Syria, prompting the Syrian government to issue a new lira note of 5,000, the largest in the Syrian currency, the central bank said in a statement to meet market demand . On one side of the banknote is a picture of a soldier saluting the Syrian flag.

Syria has been battling civil war for nearly a decade, with the continued decline of the Syrian lira since the onset of the domestic crisis in 2011. One dollar was equivalent to 47 lira 10 years ago in 2011, and is now trading at 50–250. , Reaching about 2500 in the open market.

According to Syria’s Central Statistics Bureau, food and essential commodity prices have skyrocketed, with the country’s currency weakening, with the average rate of inflation reaching 200 percent in 2020. Vegetable oil prices have increased by about 15 percent.