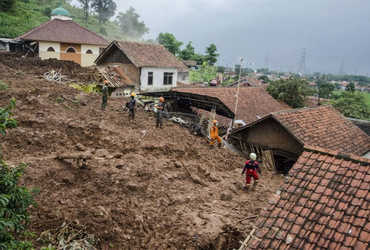 Rescuers are searching for 26 people after two rocks fell in a village in Indonesia’s West Java province last weekend. On Sunday, at least 13 people were killed and 29 others were injured in a landslide in Sihanjung village in Sumedang district of West Java.

Some rescuers who went to rescue the people trapped in the first landslide were also killed in the second landslide. Search and rescue operations were interrupted by rainy weather in the area around the crash site.

Recent monsoon rains and high tides in Indonesia caused landslides in many places. And there is tremendous flooding. In this country of 17,000 islands, millions of people live in flood-prone mountainous areas or fertile riverbanks.