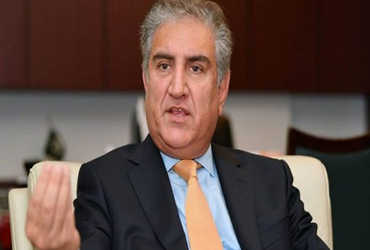 Pakistan is afraid of India, which got a glimpse today, Pakistan Foreign Minister Shah Mehmood Qureshi said on Friday that he had reliable information that India is planning a surgical strike on Pakistan once again. The Pakistani foreign minister made the claim during a press conference in Abu Dhabi, where he arrived for a two-day visit.

During his visit to the UAE, the Pakistani Foreign Minister also met senior officials of the UAE government. He was speaking at a press conference on bilateral meetings with the United Arab Emirates leadership when he said he had received information from intelligence sources that India was planning a surgical strike on Pakistan again. Not only this, the Pak foreign minister also said that India was also negotiating with its key allies, whom it considers its partner, and was trying to get their consent.

Qureshi made a very absurd statement as to why Pakistan’s foreign minister is afraid of surgical strikes from India. Qureshi said that there are currently many “serious internal problems” in India, including the peasant movement, from which the government can take such steps to divert attention so that a divided nation can unite in the name of Pakistan. According to Dawn, Pakistan has already been put on alert in view of the ongoing surgical strike by India.

It may be mentioned here that in the last four years, India has carried out two major surgical strikes against Pakistan and the terrorist camp. On 29 September 2016, India launched its first surgical strike in the occupied territory of Pakistan and destroyed several launch pads of terrorists.

The militants attacked a military base in the Uri sector of Jammu and Kashmir, while on 26 February 2019, India destroyed Jaish-e-Mohammed’s camp in Balakot, Pakistan. The surgical strike followed an attack on a CRPF convoy in Pulwama, Jammu and Kashmir.