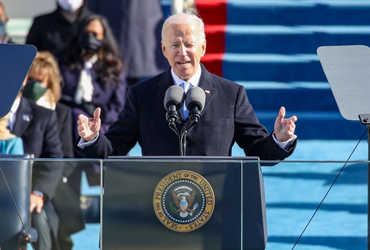 If Biden said it’s America Day. It is a day of democracy, a day of history, hope and renewal. This day is being celebrated due to democracy. Everyone will be heard in America. We have learned that democracy is valuable. Democracy is fragile.

Biden further said that I sincerely thank the people of both sides for their presence here. I also thank my previous presidents. All will be honored in the US. The US military is strong and ready for any challenge.

“People lied for power, but we stand here today with justice and in favor of violence,” he said. We have to fight violent politics. I am not the president of any party, but I am the president of all the people of America, I am also the president of those who did not vote for me. I will work for the progress of all people.

Today a new history is being made. American soil has been respecting the sentiments of the people. We have to keep it and do our best for the country. We have to follow our 400 year old tradition. Biden said the United States is fighting the Corona crisis. Millions of people lost their lives due to the mistake of the previous government, but we should face this epidemic with courage. Whatever challenges will come, we will deal with them wisely.

Today Kamala Harris has become the first female vice president in the history of the United States, so we would not say that change is not possible. This is a big win. I am completely dedicated to uniting America, bringing people together.

We also have to face the challenges of the economy and work hard for it. Everything that has happened in America due to apartheid has to happen in a democratic way. What we have done against violence is the identity of the American people.