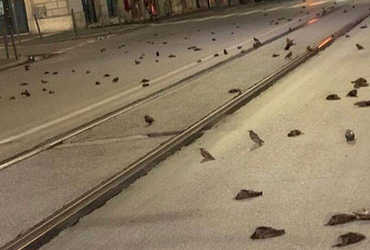 Man is constantly playing with nature. In the year 2020, the corona virus has claimed the lives of millions of people and disrupted human life. Yet man has not learned any of them. They are still in ruins. New Year 2021 was given a grand welcome by people from all over the world. Great fireworks were made in every country of the world. Fireworks then killed hundreds of people, which is really painful.

It is about Italy. Hundreds of birds have died in New Year fireworks inside the Italian capital Rome. This can be considered a kind of catastrophe. A large number of birds have died at Rome’s main train station. The cause of death is not yet clear, but the International Organization for the Protection of Animals says that it appears primarily that fireworks have killed hundreds of birds in their nests.

The organization says the birds died of fear. The birds must have been frightened by the loud sound of fireworks and the lights. It is also believed that the birds living in the nest may have flown together in fear and after colliding with each other in Afra Tafri, Divya collided and died by hitting the electric wire. It is also speculated that these birds may have died from a heart attack.