Leading market analysis firm Transparency Market Research (TMR) has published a new market research study, detailing the global homeland security market. According to TMR analysts, the market is set to exhibit a robust 5.60% CAGR from 2014 to 2020. The market, worth US$245.7 bn in 2013, is expected to rise to US$364.4 bn by 2020. The report, titled ‘Homeland Security Market – Global Industry Analysis, Size, Share, Growth, Trends and Forecast, 2013 – 2020’, is available for sale on TMR’s website. 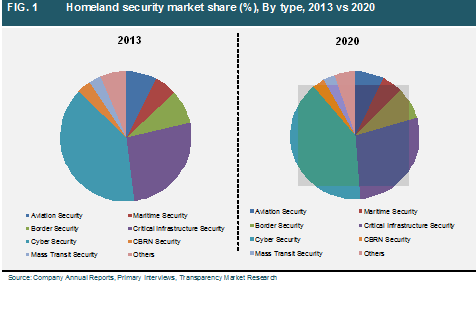 Apart from the various physical threats to a country, the rising threat of cyberattacks has added a new dimension to the global homeland security market. Cyber security held a share of more than 39% in the global homeland security market in 2013 and is expected to expand at a higher-than-average CAGR of 5.8% over the forecast period. Due to proliferation of advanced Internet resources, hacking has gained immense importance today, with both illicit and lawful cyber branches beefing up in recent years. Failure to contain a cyberattack poses a serious challenge to a nation’s integrity, as confidential information about virtually every aspect of a country could then be used for illicit purposes.

This, however, poses one of the two major restraints on the global homeland security market, as detailed in the report. The lack of sufficiently skilled personnel has left many countries at risk of cyber infiltration. While Western countries such as the U.S., the U.K., Germany, and other European powers have the manpower to handle the rising volume of cyber threats, this aspect of the homeland security market is in need of strengthening in developing countries.