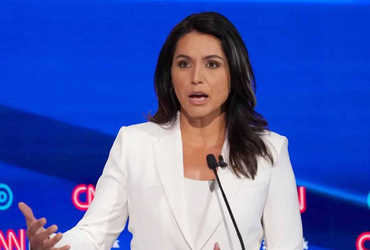 Washington, Ta. .
Former US MP Tulsi Gabbard raised the issue of atrocities against the Hindu minority in Bangladesh. He tweeted a video in which he expressed concern over the plight of Hindus in Bangladesh since 191 and appealed to all world leaders to unite on the issue. He said that the world should face radical jihadists simultaneously.
Tulsi Gabbard said that in 191, Pakistan’s army killed millions of Bengali Hindus in Bangladesh. Many women and girls were raped by Pakistani army soldiers. Religious hardcore Islamic terrorists have been persecuting Hindus in Bangladesh for 20 years.
Tulsi Gabbard, a former head of the US Army, said the Pakistani army attacked the Hindu Sarai Jagannath Hall at Dhaka University on the night of March 9, 191, killing 8,000 to 10,000 people in a single night. This cycle lasted for 10 months. 40 to 50 lakh Hindus were killed in this massacre. Thousands of women were raped and millions were forced to flee their homes overnight.
Tulsi Gabbard said that this trend did not stop even after the independence of Bangladesh. Fundamentalist Muslims today target minorities. Tulsi also mentioned that there have been attacks on Hindu temples in Bangladesh for many years and Hindus are still being killed.
Tulsi Gabbard said in the video that Hindu shops and homes were looted and H was written in yellow.
is. Around 1900% of Bengali Hindus lived in present-day Bangladesh, which has reduced to only 8% today. A few days ago, fundamentalist jihadists again attacked Hindu temples in Bangladesh and targeted Hindus.
Minority Christians are also under attack by radical jihadists in Iran and Syria. At one time, there were 1.5 million Christians in Iraq and 3 million in Syria. Today, the Christian population in Iraq has shrunk to only three million, and in Syria to four and a half million.
Millions of minorities lived in Afghanistan. Today it has fallen a lot. Today, only one thousand Hindus survive in Afghanistan. Minorities make up only 1 percent of Afghanistan’s population.

Who is Tulsi Gabbard?
Indian-American woman leader Tulsi Gabbard was the first Hindu to be elected in the US Congress. He also served as a reserve officer in the US Army. She became a Congresswoman from 2012 to 2021. Tulsi Gabbard was the vice president of the Democratic Party’s National Committee from 2013 to 2014. He introduced various bills to fight atrocities against minorities across the world and advocated for their protection. He ran in the Democratic nomination to run for the presidency from the Democratic Party. He withdrew his presidential nomination in March 2020, declaring his support for Biden. 8-year-old Tulsi Gabbard is one of the top leaders with the support of Asian-American voters.

Ship will be abandoned after paying one billion dollars in compensation, Indian workers trapped

Ship will be abandoned after paying one billion dollars in compensation, Indian crew members stranded

In exchange for the dead bodies, the Myanmar army began charging 3 relatives