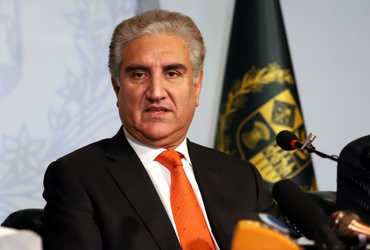 – They have trouble with 35A. Because it is trying to change the geography and population balance of Kashmir

Pakistan strongly opposed the abolition of Article 370 from Jammu and Kashmir. Pakistan also raised its voice in the international arena. However, now the Foreign Minister of Pakistan has termed the repeal of Section 3 foreign, as an internal matter of India.

In an interview, Mahmud Qureshi stated, “Abolition of 370 is an internal issue of India. The Supreme Court is also hearing on this issue. He has been challenged. There has been a backlash against all steps taken in Kashmir. Whether it is in the form of 370 or 35A. A large group believes that these measures caused more damage to India and received less.

According to him, he does not give much importance to 370, but he has trouble with 35A. Because it is trying to change the geography and population balance of Kashmir.

Qureshi said, “There is no way other than dialogue between the two countries. Both are nuclear weapon states. They have their own issues. Which will have to be resolved today, tomorrow or the day after. What is the way to solve them? War is not an option. War can be suicide. And if war is not an option then communication is an option. If communication is an option, then issues can be resolved by sitting down.