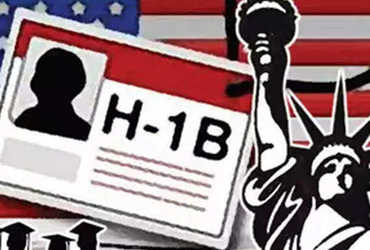 (PTI) Washington, Ta. 8
The United States has made changes to the H-1B visa process. Until now, H-1B visas were issued to foreign experts on a lottery basis, but now foreign experts will be selected on the basis of skill and salary. It will be implemented in the next 30 days. The new system will come into force when the new visa process starts from April 1.
The United States has changed the selection process for the H-1B visa category, popular among IT professionals in India. Just a few days before Donald Trump’s term ends, the Trump administration has made significant changes to its H-1B visa. According to the new process, H-1B visa holders will be selected not on the basis of lottery, but on skills and salaries.
According to a US government notification, the new changes are in the best interests of young Americans. Until now, foreign experts were selected by lottery after receiving all applications, but according to the new rules, the salary and experience and skills of foreign experts will also be taken into consideration. According to a change in Trump’s tenure on H-1B visas, if the company wanted to appoint a foreign national instead of a US citizen, it would have to pay more than the US citizen.
The government plans to implement a new selection system as part of that rule. The H-1B visa process for next year will start from 1 April. This notification has already been issued. This new method will be implemented in 90 days. In other words, in 2021, the H-1B visa system will be implemented according to the new rules.
Joseph Adlow, deputy director of US citizenship and immigration services, said the H-1B visa category was being misused by US companies. American companies generally use this category only to fill their junior-level jobs and reduce companies’ costs. The new selection process would benefit American experts and skilled citizens abroad, and companies would also have to provide a good budget to hire foreign experts.
On the other hand, the Indian-American community has called on President-Elect Joe Biden to remove Trump’s ban on H-1B visas and simplify the process. The US IT sector has also demanded that Biden take the right decision keeping in mind the needs of the US IT sector.