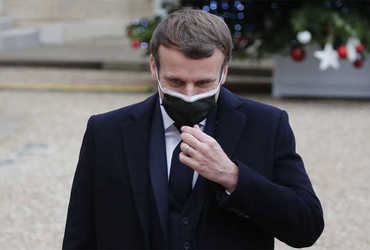 French President Emmanuel Macron Corona was today declared positive by President Elsie Palace. They were isolated for seven days after Macron tested positive as soon as the first symptoms of corona appeared.

They will stay away from work. Macron attended an EU summit last week where he met with the German Chancellor Angela Merkel and the Portuguese Prime Minister on Wednesday.

Meanwhile, White House sources said that in the meantime, Vice President Mike Pence and his wife Karen will publicly vaccinate Corona on Friday. President Dr. Biden said on Tuesday that top infectious disease specialist Drs. Anthony Fossey has also advised him to get the Corona vaccine as soon as possible.

“I don’t want to break the queue to get the corona vaccine, but I want to show the American people that the corona vaccine is safe,” Biden said. Joe Biden hopes to publicly vaccinate Corona next week. However, there are reasons that Americans should be concerned about vaccination.

The New York Times reported that two patients had an allergic reaction after Pfizer was vaccinated with Corona in the UK and now a health worker in the US also had severe reactions despite not being allergic.

In Sweden, meanwhile, the death toll in the first wave of the Corona epidemic has been high, but Sweden has taken other measures instead of lockdown, forcing authorities to reconsider during the second wave.

As the condition of the country’s ICU unit deteriorates, the demand for strict control against corona infection is increasing. The government is planning to enact an emergency law as it does not have the power to order people to stay at home. The Corona epidemic in Sweden has killed a total of 7,900 people and the total number of cases has been 3,57,470.

Even in South Korea, with the exception of one in its capital Seoul, where the corona epidemic has raged, all ICU beds are filled with corona patients. For the first time in the country’s history, the government is considering imposing a lockdown.

South Korea has so far faced a severe lockdown by wearing masks and strictly following other regulations. The number of corona cases has been steadily increasing since mid-November due to the cooling of temperatures. More than a thousand new cases of corona have been reported in South Korea, with a total of 634 deaths in the last 24 hours.

Twitter has started removing all misinformation about the Corona epidemic from its site. The posts claim that the corona virus is not true and that the corona vaccine will be used to control or harm people. Twitter has also announced the implementation of the new policy in one of its blocks from next week.

It states that if people tweet in violation of the rules, they have to cancel the next tweet before retweeting. It will not appear until the sinister tweet is removed. Now if the tweet is fake, rumors, controversial claims, or incomplete or irrelevant information will follow.

Facebook and YouTube have also announced the removal of posts that spread misinformation. It is only when mass vaccination has been introduced in the US and other countries that social media has taken steps to remove misinformation about the Corona vaccine.