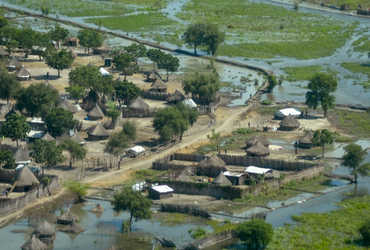 Juba, Ta. 2
Flood victims in South Sudan are facing starvation. People who do not get food grains are forced to eat leaves and spend their days drinking dirty water.
Extreme levels of flood risk were announced in South Sudan. The condition of the flood-affected people has become very pathetic. People who have nothing to eat are forced to eat leaves.
Flooding in South Sudan has rendered nearly 1 million people homeless. These people have neither home nor bread nor food. These people living in dense forests are surrounded by floods and are living with the help of the United Nations. People have been forced to drink flood water due to lack of safe drinking water.
The civil war in South Sudan has already worsened. In it, the feet of the people in the grip of this terrible flood have been broken. People are drinking dirty water, forced to eat leaves after starvation. Due to non-availability of health care, a severe epidemic overshadows these homeless people.
According to media reports, millions of homeless people have become infected with malaria, cholera, diarrhea and vomiting fever. Some have drowned, while others have died of the disease.