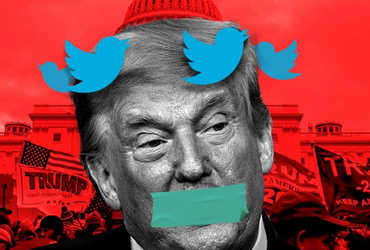 Crowds of supporters of outgoing US President Donald Trump stormed Capitol Hill in an attempt to gain control of the Senate. A total of four people, including a woman, were killed in police firing to disperse the mob. Police and security forces drove out the rioters.

Meanwhile, all Trump accounts have been blocked on social media following violence by Trump supporters in the US Congress. Along with Twitter, Facebook also blocked Trump’s account. Twitter warned that if Trump broke the rules in the future, his account would be permanently closed.

In fact Donald Trump addressed his supporters when there was an uproar in Washington. During this, he appealed to the supporters to go home. But he made some claims about American elections and violence that were unfounded. This was the reason that there was not much violence, so this action was taken.

Talking about Facebook, President Donald Trump’s page has been banned for 24 hours. Facebook says the page has led to two major violations in a row, and the decision was made in light of the situation. Also, the video of Donald Trump’s speech that was posted on YouTube has been removed. A similar decision was taken on Instagram and the account was closed for 24 hours.

Four people killed in riot gear, attended a rally on Friday, removing hundreds of protesters from trucks
In the final days of President Donald Trump’s term, the United States has seen violence once again. This time, supporters of Donald Trump rallied in Capitol Hill, Washington. When it happened late at night in India, Trump supporters attacked Capitol Hill with weapons, committed vandalism, drove out and captured the senators. However, after a long struggle, security forces drove him out and secured Capitol Hill.

Trump’s daughter Ivanka called the rioters a patriot, removing the tweet after harsh criticism
Trump’s daughter Ivanka called the rioters “patriots” on social media, praising the violence perpetrated by supporters of President Donald Trump, bidding farewell to Washington DC in the United States. However, following harsh criticism of Ivanka on social media, she deleted her tweet and started speaking in her defense. As Ivanka wrote earlier, ‘O American patriots, no violence or violation of law can be accepted. Stop violence immediately. Peace be upon you… ‘His tweet was immediately criticized and thousands of users took a dig at Ivanka for calling the rioters patriotic. After this Ivanka realized her mistake and deleted the tweet.