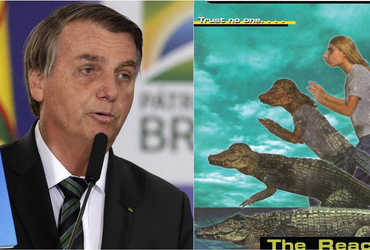 As the Corona vaccine has begun to get approval in many countries around the world, Brazilian President Jar Bolsonaro has been engulfed in controversies with a surprising statement. He said that the corona vaccine can make people crocodiles and grow beards to women. He trolled on Twitter.

Brazilian President Bolsonaro issued a statement regarding the Pfizer-Bioentech vaccine, which is considered effective against the corona epidemic. Bolonaro was ignoring the Corona epidemic from the beginning. Bolsonaro was infected with Corona a few months ago. He recently announced a vaccination program for Corona in Brazil. However, he personally refused to take the Corona vaccine.

Regarding the vaccination program in the country, he said that all people in the country will be vaccinated free of cost. However, vaccination is mandatory. “We are not responsible in any way for the side effects of the Pfizer vaccine,” Bolsonaro was told by the AFP news agency. If you become a crocodile after being vaccinated, then it is your problem, not ours. He further said that if you become a super human, if a woman grows a beard or if a person starts speaking in a low voice, we will not be responsible in any way.