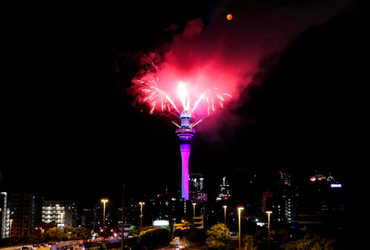 The year 2020 ends with the memory of Corona’s new and defective pain. Today marks the 21st year of the 21st century. The 21st year is important in terms of maturity. The time to come will be more spectacular, when the Earthlings will show more maturity this year and save the Earth. The new year, which begins January 1, is based on the international dateline. A nine-year arrival in New Zealand-Australia, formerly one of the leading countries near Dateline, was greeted with fireworks.

Gorgeous fireworks are held every year in Australia, which was also done this year. Fireworks can be seen off the coast of Sydney Harbor. Therefore, in some restaurants in the Harbor area, the price of a seat on the 31st night rose to 150 Australian dollars (about Rs 4,000). A million people gathered in Sydney last year to celebrate. This time only a few thousand people came out instead.

New Zealand is two hours ahead of Australia. This means that the new year began there two hours earlier. In addition, small island countries near Dateline also entered the New Year throughout the world. Fireworks were also performed in Auckland, New Zealand and video-photos of the crowd were seen. South Korea has a tradition of ringing the bell on New Year’s Eve. The ceremony was canceled for the first time after 19 years.

The villain of Corona, the New Year celebration also began in China. A large number of tourists from India came to Goa. Various areas of Mumbai were also illuminated. Taiwan fireworks from its tallest building, Taipei-101. Japan welcomed the new year with restraint rather than a grand celebration. Liberal ceremonies also took place in other countries where there are more cases of corona.

The tradition of moving to one’s hometown or family on the eve of New Year was also postponed by many countries. The Emperor of Japan came to the balcony and presented a video message instead of greeting the people. Due to the night curfew being implemented in many countries including India, most people opted to stay home.

The new year is celebrated on a time-bound basis. There are a total of 8 time zones on the globe. The time zone is only the difference in the time we go from one country to another. If New Zealand is in the east, the sun’s rays will first reach there and the countries located in that direction will be the first to enter the new year. The US-Canada is one of the last entrants. There are total 8 time zones, so it can be said that the new year is celebrated 3 times in different countries. Because the new year starts at 12 o’clock at night for every country. Due to the Karna period, a total of 6 to twelve bells are sung at various places on the earth.