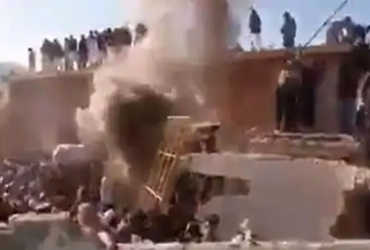 A Hindu temple in Khyber province of Pakistan has been set on fire by Islamic extremists. India strongly opposed this incident. In Bhish, Pakistan later suspended eight police personnel from the area where the incident took place.

Some construction was going on to increase the area of ​​a Hindu temple in Teri village in Karak district of Khyber province. The mob set fire to the temple in protest. Whose videos and photos also went viral. Bhishma Sarkar has registered a case against 350 people after heavy criticism of the incident.

While 100 people involved in the attack have been arrested. And eight policemen have been suspended for preventing violence as well as failing to curb tensions. Those whose names have been recorded in the FIR include Maulana Imdullah, Maulana Matiullah, Maulana Muhammad Hakim.

He is accused of inciting the mob by local clerics. Attacks on minorities are increasing in Pakistan. After which Imran Khan Sarkar has come to Bhish and is now pretending to take action.