Air interception radars are anticipated to dominate the early warning radar landscape, with an estimated revenue of ~US$ 1 billion by 2027. This is why, defense contractors in the early warning radar market are developing state-of-the-art radar systems that can be used to help successfully intercepting incoming aircraft or launching surface-to-air missiles. There is surging demand for technologically-sound radar systems, as many countries are developing carefully-shaped fighters and bombers that minimize the return a radar will receive from the aircraft, which leads to significant reduction in its detection range.

As most countries are compromised by potential defense threats, it is the onus of defense contractors in the early warning radar market to increase their capabilities in new passive radar systems that detect electromagnetic emissions in the atmosphere and other radio signals. Since stealth is considered vital for aircraft survival, defense contractors are introducing radar systems that can identify aircraft by assessing how the signals bounce off airborne objects.

Nuclear intercontinental ballistic missiles, sea-launched land-attack missiles, and hypersonic weapons have catalyzed the need for advanced radar systems capable of providing early detection. The early warning radar market is flourishing in Asia Pacific. Likewise, China is found to be increasing its capabilities in quantum radar systems that not only detect stealth bombers, but also monitor high-speed flying objects in the upper atmosphere. These systems are also being used to detect ballistic missiles.

Stakeholders in Chinese defense electronics companies are entering the experimental verification phase to assess quantum states of subatomic particles, based on single photon measurement technology. This technology is particularly useful for the detection of extremely weak signals that are given off by stealth jets. Since stealth aircraft flown by the U.S. and its allies pose as a major threat to the regional interests of various countries, stakeholders in the early warning radar market are developing advanced radar technologies that act as effective countermeasures.

To understand how our report can bring difference to your business strategy, Ask for a brochure

North America is estimated to account for a revenue of ~US$ 600 million by the end of 2027, in the early warning radar market. Since North America has the potential to grow exponentially in the defense landscape, stakeholders are increasing investments in the U.S. defense space. As such, they are increasing their focus on the development of ballistic missile defense systems in the U.S. defense space. There is a growing need for these systems, as they provide an integrated and layered architecture to destroy missiles and their warheads, before they can reach their targets.

Ballistic missile defense systems offer exceptional general space surveillance and satellite tracking. However, it is unclear whether the system’s geostationary space-based sensors are capable of discriminating and detecting unique heat impressions generated by hypersonic boost-glide weapons (HGVs) in the skip-glide phase of its flight from space. This ambiguity poses as a destabilizing challenge where HGVs pose as a threat to existing early warning systems. Hence, stakeholders in the early warning radar market are developing high-end battle management system software to minimize the vulnerabilities of ballistic missile defense systems. 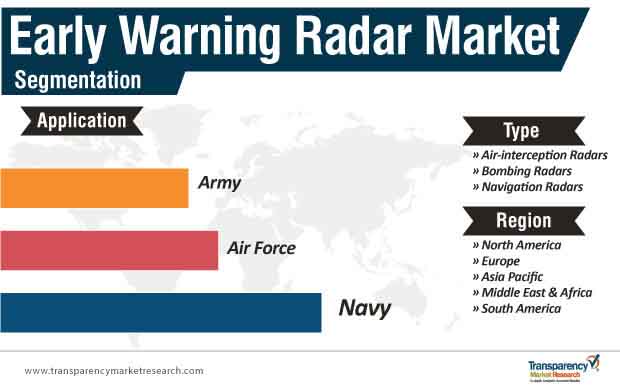 Stuck in a neck-to-neck competition with other brands? Request a custom report on Early Warning Radar Market

Our reports are single-point solutions for businesses to grow, evolve, and mature. Our real-time data collection methods along with ability to track more than one million high growth niche products are aligned with your aims. The detailed and proprietary statistical models used by our analysts offer insights for making right decision in the shortest span of time. For organizations that require specific but comprehensive information we offer customized solutions through ad-hoc reports. These requests are delivered with the perfect combination of right sense of fact-oriented problem solving methodologies and leveraging existing data repositories.