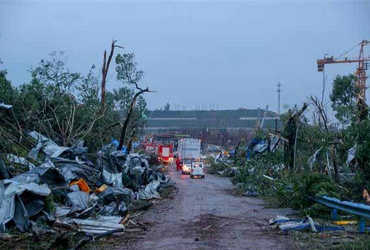 (PTI) Beijing, Ta. 13
In China, the cyclone has caused havoc in two cities. In Wuhan and Suzhou, the storm killed at least 17 people and injured 200 others. Many houses have collapsed. Thousands of houses in both cities have been blacklisted.
Storms occurred in Wuhan and Suzhou. Twelve people died in this storm. About 200 people were injured. In Suzhou, strong winds wreaked havoc on 12 factories. Six houses collapsed in Suzhou. Electricity was cut in many areas of the city and many trees uprooted.
3 houses collapsed in Wuhan due to the severe storm. 150 buildings were badly damaged. Thousands of people were forced to spend the night in the dark as 4,000 homes in various parts of Wuhan city went black.
According to China’s official Xinhua news agency, many construction sites have been damaged. There was no chance of a storm. Suddenly a storm came and was devastated. The wind was moving at a speed of 3 meters per second. Trees in cities could not absorb zinc against the wind blowing so intensely. Trees were seen falling on the roadside.
After the storm subsided, local authorities began efforts to address electrical complaints. Similarly, an exercise was made to uproot the fallen trees and reopen the road.