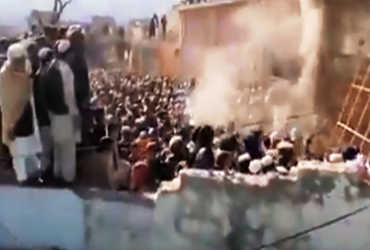 A new case of religious intolerance has emerged in Pakistan. A mob of over 100 people allegedly vandalized a Hindu temple and set fire to Khyber Pakhtunkhwa province. According to the information received, the incident took place in Karkar district and the incident was carried out by a mob led by local clerics.

Video of the incident is going viral on social media. In this video clip, a violent mob is seen smashing the walls and roof of the temple. Human rights activists in Pakistan and other parts of the world have condemned the move against the Hindu minority.

According to media reports, Jamiat Ulema-e-Islam, a Sunni Deobandi political party in Pakistan, organized a rally near the Islam Fazle temple. Where an aggressive speech was made and then the furious crowd marched towards the temple where the temple was ransacked and set on fire.