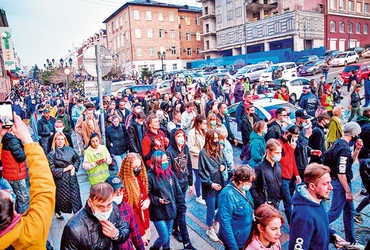 – US Ambassador to Russia to return this week: diplomatic relations between the two countries begin to deteriorate

MOSCOW: Russian President Vladimir Putin gave his annual state address to the nation. In it he killed many birds with one stone. He said in clear words to the countries of America and Europe that you do your work and let us do our work. Countries that cross Russia’s target line will receive a strong response. The answer will be so fatal that there will be no time for the country to regret it.

Meanwhile, US Ambassador to Russia John Sullivan will return to Washington. They are coming to discuss Russia’s issue with the government and they are said to be returning to Russia in a few days. But months ago, Biden called Russia’s Putin a murderer. Russia recalled its ambassador to the United States. That is why diplomatic relations between America and Russia have started deteriorating.

“Everything we do on the Ukraine border is a matter between us and Ukraine,” said Putin. Other countries should stay away from it.

Even in Russia, some who oppose Putin are in favor of Navalny. Putin called on both his domestic and foreign supporters to be cautious. “We have nowhere to drop a missile or a bomb,” he said. But if anyone dares to seduce Russia, our answer will be given immediately and this answer will be difficult for the country to remember forever.

Russia is modernizing its nuclear weapons. Putin said the weapons update would continue. Currently more than 30 warships are conducting military exercises in the Black Sea near Russia. Through this exercise, Russia is showing its strength to countries including the US. There is a decades-old conflict between Russia and the United States and the situation is tense as the two countries expel each other’s diplomatic officials.