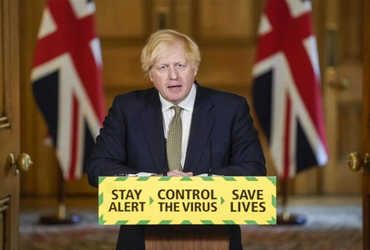 British Prime Minister Boris Johnson has blamed China for creating a crisis for the entire world, opening up a front against China, Johnson said, adding that the spread of the corona virus is due to a distorted medical practice in China.

He flares up at those addressing an event for global leaders, who are largely pinging to make the pangolin more efficient, a comment he made during his speech at the One Planet Summit hosted by French President Emmanuel Macron Had.

Pangolin is heavily trafficked, and is believed to be responsible for the spread of the corona virus.

He attributed the imbalance between humans and nature to the corona virus, a virus derived from bats or pangolins.

However, China has resented Johnson’s remarks, and Chinese Foreign Minister Zhao Lijiaz said that “we have often said that the origin of the virus is a scientific matter.” “There is no room for speculation, otherwise international cooperation will be affected,” he warned, noting that Britain, the United States and Australia have often made similar remarks against China due to Corona.

A British sniper fired a bullet from a distance of 900 meters, killing five IS militants.

A person who has been vaccinated can also spread corona infection

China’s plot to start a water war in India by building a dam on the Brahmaputra River!