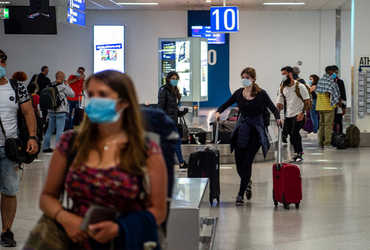 The United States, which has lost more than 3 million people to the Corona virus, is now wary of its new strain, prompting the US administration to issue Corona-negative certificates to all travelers arriving from Britain before air travel did. After arriving there, it has announced a ban on pilgrims arriving in their country.

The US Center for Disease Control and Prevention (CDC) said passengers arriving from the UK must obtain a CVID-19 free certificate within three days of their departure and submit it to the airline. The CDC said the orders would be signed on Friday, with effect on Monday.

Countries around the world have become particularly cautious after a new strain of the corona virus was found in Britain. India is also one of the countries where travelers coming to the UK at the airport are being intensively tested. It is worth noting here that a new strain of corona is being created due to mutation.

This new strain of Corona has been termed very contagious, scientists have named this new strain B.1.1.7. Officials say the virus spreads 70% faster, with lockdowns underway in many parts of the UK, where people’s desire to celebrate Christmas has been turned upside down, and research on the new version in countries including the United States and Britain Its going on.