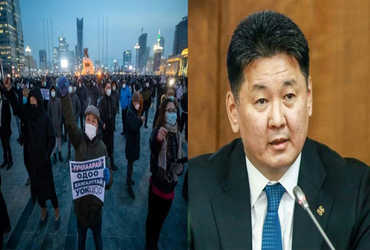 The Prime Minister of East Asian country Mongolia, Khuralsukh Ukhna, has resigned in the country’s parliament. She resigned from her post because a Corona positive woman was abused in her country.

Someone made a video of the hospital administration doing this and it went viral. Inside the video, the woman is seen holding her newborn baby. Only in the freezing of -25 degree Celsius have he worn hospital clothes and plastic slippers. After the video went viral, people started protesting against the Mongolian government.

Gathered in the country’s capital and raised slogans against the government. The protests have forced Mongolian Prime Minister Khurlsukh Ukhna to resign. At the same time, many administration officials including the Health Minister have resigned. The Prime Minister of Mongolia apologized to the people of the country, saying that unfortunately we made a mistake while displacing that mother and child. Therefore, as a Prime Minister, I should take responsibility for this.

Mongolia has a total population of 32 million. Where so far only 1584 Corona cases have been reported. So only two people have died due to the Coro epidemic.