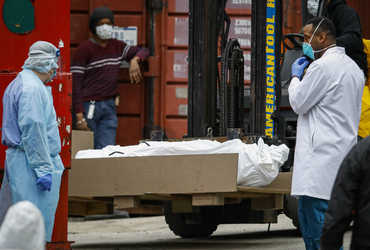 – Even in Brazil, the death toll due to corona has crossed two lakhs

On the one hand, there is a power struggle in America regarding the presidency. Whose embarrassing scenes were seen by the whole world. So, on the other hand, Corona is doing well in America. A record-breaking 3,054 people died in a single day in the United States on Thursday. This is a new record not only for America but for the whole world. No country in the world has seen such a large number of deaths in a single day since the onset of the Corona epidemic.

According to the Corona Tracking Project, 3,054 people died in the United States on 7 January. On May 7 last year, the highest number of deaths occurred on a single day. On May 7, 2020, Corona killed 2,769 people in the United States. According to the information received, the prevalence of corona is increasing in every state of America. California is the most affected.

So on this side the prevalence of pum corona in Brazil is increasing continuously. The death toll from the Corona virus in Brazil has crossed two lakh on Friday. After the United States, Brazil has the highest number of deaths due to corona.