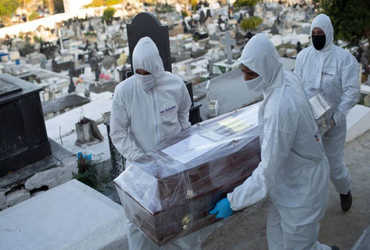 Brazil is the third most affected country in the world due to the Corona epidemic. In Brazil, the corona epidemic has begun to take its toll once again. More than 1,100 people have lost their lives due to corona in the last 24 hours in the country. This is the first time since October that such a large number of deaths have occurred in Brazil.

In addition, 58,718 new cases of corona have been reported in the country in the last 24 hours. With this, the total number of corona virus cases in the country has crossed 75 lakh 63 thousand. São Paulo is the most populous city in Corona, Barcelona, ​​which has been most affected by the epidemic. More than 1.4 million cases of corona have been reported so far. Therefore the death toll due to corona is more than 46 thousand.

The United States tops the list of countries affected by the corona virus in the world. It is followed by India in second place and Brazil in third place. However, the corona situation inside India remains under control. While the situation in America is similar in Brazil.