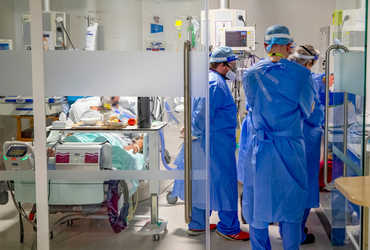 The number of cases in Britain has increased rapidly since the discovery of a new strain of the corona virus. Due to which the corona crisis has deepened once again in Britain. The steady increase in the number of coronary cases has created a problem for hospitals. Corona’s condition is so bad that the country’s National Health Service President said on Tuesday that the nation is in a state of crisis again.

This new strain is largely responsible for the rise in corona cases in Britain. According to figures released by Britain’s National Health Service, a total of 20,426 people were being treated inside the hospital on Monday. The figure shows the crystal position of the corona in Britain. Because on 12 April this year, when Corona was at its peak in Britain, 18,947 patients were being treated in hospitals.

The new strain is so contagious and deadly that full lockout has been implemented in the UK this month. In addition, more than 50 countries around the world have banned flights from the UK. “We are once again in crisis due to the second wave of coronavirus in Europe and its countries,” said the head of Britain’s healthcare. Many of us have lost relatives, friends and colleagues.

However, he also hoped that the situation would return to normal soon. The epidemic will be brought under control by the Corona vaccine.