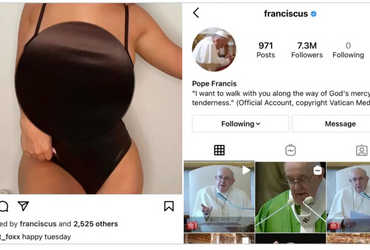 Vatican City, Ta. 25
Former rated model Margaret Fox shared a screenshot claiming that Pope Francis was among the 500 people who liked her hot image on Instagram. This is the second time in a month. Earlier, a model picture of Pope Francis’s account was also preferred.
Controversy has rekindled over Pope Francis’ liking of former rated model Margot Fox’s photo. The model proved this by sharing a screenshot. In which he wrote: Pope Francis has liked my photo, it means that I am going to heaven. People reacted strongly to this. Many users were surprised to learn that Pope’s account was liked in such a hot picture.
Earlier, a picture of a Brazilian model from the Pope’s account was disputed and Vatican City ordered an investigation into the case. At the time, the photo of a bikini-clad model featured the Pope’s liking.
Vatican City did not make an official statement on the matter, but urged Instagram to disclose. Watson City sent a notification to Instagram about how it happened.