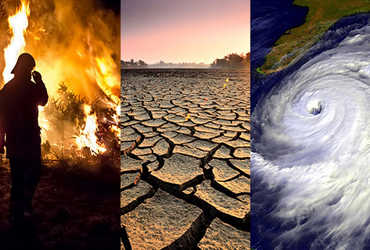 735 billion flood damage in India: US hurricane season most damaging

Cost calculation – One year climate fragmentation has been issued on how much damage the world has suffered from environmental disasters during the year 2020. Accordingly, the country has suffered an estimated loss of approximately 10 billion (about Rs 735 billion) due to the devastating floods in India during the year.

According to a report prepared by the London-based charity Christian Aid, the top 10 disasters caused by climate change cost the world more than 140 billion a year.

Asia alone had five out of ten disasters due to monsoon. Everyone knows that the monsoon lasts a long time. It is inevitable that rain will come, but if it happens, it will cause a lot of damage and it is happening to India. Major disasters of this year include flood, forest fire, storm etc.

The United States has had the most storms this year since 2005. It cost 40 billion in the United States. Nine out of ten disasters are billed or 5 billion or more.

This report takes into account major losses from climate disasters. Floods in Sudan, heatwaves in Siberia, Russia, wildfires in South America, two hurricanes in the Philippines and floods in Vietnam were all unimaginable. But it has reduced economic losses.

Various states of India suffered various disasters throughout the year, some of which were unimaginable. For example, Hyderabad received 30 inches of rain in 24 hours. In Kerala, 49 people were killed in a landslide at one place. The floods rendered thousands homeless. There is a big difference between environmental protection and reality, so it is difficult to prevent such damage.

Here is a description of the biggest disaster of the year. Loss figures are in the billions of dollars.