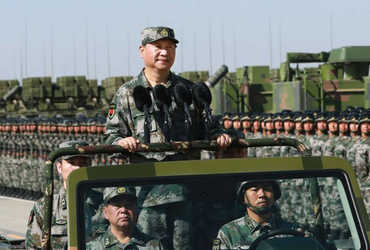 With China becoming sovereign of both the ruling party and the military, President Xi Jinping has been ordered to be ready for war at any time. With this the army is asked to increase training in actual combat situations. The United States passed a bill in its parliament emphasizing Tibet’s independence, while China flew a helicopter over a military drill in Lhasa to maintain its hold on Tibet. Meanwhile, India accused China of changing the status quo in Ladakh. To counter China, India will sign a 4.5 billion agreement to buy three medium transport aircraft for the Air Force.

Chinese President Xi Jinping said that the People’s Liberation Army should be ready for action at any time and ready for war at any time. Conflict on the front of the border should be used to increase military capability and the use of technology in training. In his first command after acquiring major powers in the Central Military Commission, Xi Jinping emphasized the need to strengthen the military and increase its ability to win by training in real combat situations.

He said that the army should increase the integration of new equipment, new forces and new battlefields in training and combat processes. Jinping has ordered the army amidst conflict with India along the Line of Control on the Ladakh border. Meanwhile, the United States passed a bill in its parliament that empowered Tibetans to choose their Dalai Lama. At this time, China undertook a military exercise in Tibet’s capital, Lhasa, to completely crush Tibet’s sense of independence and maintain its dominance over Tibet.

Meanwhile, India accused China of changing the status quo in Ladakh. The Defense Ministry said in its annual review report that China had tried to change the status quo by using unconventional weapons against Indian troops on the Line of Control (LoC) in Ladakh. The Defense Ministry said in its review report that with the help of the Air Force, the Indian Army repelled the Chinese Army with immediate effect and vigorously guarded the country’s borders. In addition, to counter China, India will sign a 4.5 billion agreement this year to buy six medium transport aircraft for the Air Force. These aircraft will replace the obsolete Aero-3 aircraft in the Air Force. Airbus Defense and Space and Tata Advanced Systems Ltd. As part of the Make-in-India initiative in the aerospace sector, 4C-3 will manufacture transport aircraft.