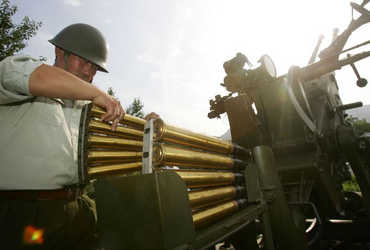 China has decided to extend its weather modification program after the Corona epidemic hit the whole world. Many meteorologists are concerned that China is preparing for a climate war with the world in view of its weather modification program, which China claims is beneficial to agriculture as it seeks to gain control of nature. China’s program could prove dangerous to the world due to its constantly conflicting relations with neighboring countries.

China fired 12 rockets from a pick-up truck to bring artificial rain 200 miles south of Beijing last month. The Juye County Meteorological Department ordered the rocket to be launched to alleviate the drought problem in the local area. The area received more than two inches of rain within six hours of the rocket’s launch.

To combat drought, control wildfires and improve air quality, China has decided to expand its weather modification program to 202 over an area of ​​more than 3 million sq km. China claims that in the next five years it will acquire artificial rain and hail technology over an area of ​​one and a half times larger than India. It will also be successful in preventing snowfall. Although conspiratorial China equates the program with its efforts to avert natural disasters, experts fear that China may change the climate of neighboring countries and cause them trouble.

China has been exercising climate control for a long time. He has used cloud seeding technology to get rid of smog before the 2008 Beijing Olympics and to keep the sky clear during the Olympics. Cloud seeding technology for artificial rain is not new. It has been used for decades. Under this, small amounts of silver iodide are implanted in the rain. It then condenses around the new element and rains over a certain area before increasing the load due to moisture.

Between 2015-16, China spent 1.8 billion, or 4.31 billion rupees, on various climate change programs. Last year, China’s state-run Xinhua news agency said that climate change technology had reduced hail damage by up to 30 percent in China’s northern region of Xinjiang. This area is very important for agriculture. In addition to China and the United States, many countries have invested in cloud seeding technologies. However, China’s enthusiasm for the event is worrying for neighboring countries like India. Climate change has affected the monsoon and made it more difficult to predict.

According to a study by the American National Science Foundation, if atmospheric conditions are favorable, artificial rainfall can be carried out over a large area through cloud seeding technology. China claims that it intends to use the climate change program in its own interest, but experts believe that China can also use it against neighboring countries. India is China’s arch rival in Asia. In Ladakh, there has been a long-standing border dispute between China and India. It can also achieve strategic advantage by using this technique.

A study last year by the National Taiwan University said that the lack of coordination of the climate change program could lead to disputes between China and neighboring countries such as ‘theft of rain’. There is a need to monitor this controversial program and determine its limits. Experts believe that through this program, China can also start a geoengineering project. Upon its success, China could be a threat to the international balance of power. Such experiments need to be regulated internationally.

Keeping a close watch on the conflict with China in Ladakh and China’s weather modification program, the Indian Meteorological Department has established a radar network in Ladakh to monitor the changing weather in the Himalayas. “Three radars have been installed in the Himalayas and the rest will be launched soon,” said Rajeev, Secretary, Ministry of Earth Sciences.