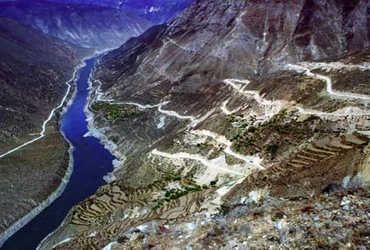 China has conspired to wage a water war in India by building the Yarlung Zhangbao Dam on the Yarlong Zhangbao River, the highest in the world. This river becomes the Brahmaputra River which enters India through Tibet. China’s blockade has raised fears of a water crisis not only in India but also in South Asia. On the other hand, amid clashes on the Ladakh border, China quietly deployed large numbers of troops on the LAC, breaking the treaty signed by Indian and Chinese forces in September 2020.

Bertil Linter wrote in the Asia Times that China had not released any technical details about the massive dam, but local media reports said the dam would be larger than the Three Gorges Dam on the Yangtze River and for power distribution in China Will generate three times more electricity. China’s original intention behind the construction of this huge dam is to create water scarcity in the lowlands ie India and Bangladesh.

Not only India but Bangladesh have also opposed China’s blockade. If China builds a huge dam on this river, it will affect the water supply in many countries of Southeast Asia along with India. China has built 11 large dams on the Mekong River, causing irregularities in its waterways without prior notice, causing many problems in Myanmar, Laos, Thailand, Cambodia and Vietnam. This situation may also occur in India, Bangladesh after the closure of the Yarlong Zhangbao River. In addition, China hopes to use the dam as a tool of war in times of political crisis.

Meanwhile, in view of the ongoing conflict along the Ladakh border, Indian and Chinese troops agreed in September 2020 not to deploy more troops along the Line of Actual Control. But China broke the treaty and quietly deployed a large number of troops to tense areas near the LAC. A recent ground reality investigation has revealed that India has also pelted stones at troops as a precautionary measure as Chinese troops violate the agreement reached after the sixth round of talks on September 21, 2020, with large numbers on LAC Have deployed troops in

Temperatures in the Ladakh mountains are currently minus 40 degrees, but neither country has lowered its military level. The current situation here is calm due to winter, but the tension is still there. China’s actions led to doubts about its intentions.