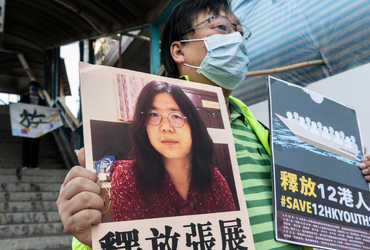 – China is trying to hide something from the world

China has been viewed with suspicion since the corona virus spread worldwide. All the countries of the world agree on one thing that the corona virus is spread from Wuhan, China. Many countries have blamed China for this. China has consistently denied the allegations. Yet the world knows that China is hiding something from the beginning. Evidence of this has been found once again.

The first case of corona virus in the Chinese epicenter of Wuhan came to light when a female journalist made live reporting. China has sentenced a woman journalist to four years in prison. A female journalist named Zhang Zhang has been convicted of quarreling and inciting people about Corona during reporting.

When the Corona epidemic spread worldwide last February, its live reports and articles were widely shared on social media platforms, drawing the attention of officials. Zhang’s supporters and ambassadors from various countries gathered outside the Pudong New District People’s Court in Shanghai on Monday morning. All these people started to empower Zhang Zhang. However, the police did not allow any of these people to enter the court. Reporters were also barred from taking photos and videos.

The first Chinese doctor to be diagnosed with Corona was pronounced dead at the scene. China has also sentenced the journalist to four years for informing the world about Corona. Which makes it clear that China wants to hide something from the world.

In addition, Zhang is one of four journalists arrested in Wuhan for reporting on Corona. One of these journalists is someone no one knows about.