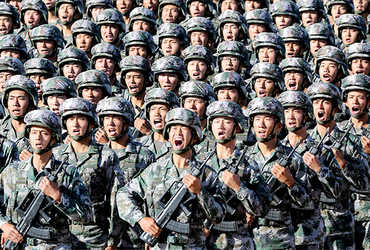 The US intelligence agency has made a shocking disclosure about China. China, like a science fiction film, is experimenting with modifying the DNA genome inside its soldiers to make it more powerful and stronger. According to the US Central Intelligence Agency, China has experimented with its own troops to make them biologically rich.

John Ratcliffe, director of the US National Intelligence Agency, claims that China is currently working to make its People’s Liberation Army supernatural by using biological experiments. China aims to capture the entire world.

Last year, two US researchers wrote in their research that China is currently working on using biotechnology in the field. It is in the process of using gene editing technology in human cells to make them stronger than normal cells. This will soon heal the wounds of the soldiers and they will be able to fight for long periods of time without food. They will be able to fight easily in difficult areas, which will be ahead of common men.

Researchers wrote that China specifically uses CYISPR (CRISPR-cluster) in routine small palindromic repeating techniques. In the world till now this technique has been used to treat hereditary diseases and to increase plant yields. But scientists in the West, out of a sense of morality, have not used this technique to increase their power over healthy humans. did. But the Chinese government is using this technology to make its soldiers super soldiers.

Until now, the idea of ​​creating a supernatural using genome technology has been a myth, but according to experts, China will soon fulfill it. According to Elsa Kania, who works in the Chinese Department of Defense Technology at the new US Security Center, Chinese defense researchers are increasingly working in this direction. Wilson Wardnik, a US Navy officer and Chinese expert, agrees with Elsa. According to Wilson, Chinese military scientists and strategists strongly believe that biotechnology has great potential for dramatic changes in future strategies. Therefore, Chinese scientists are continuously working in the field of biotechnology.

American researchers quoted the 2017 Chinese general as saying that modern biotechnology, information and nanotechnology should be combined to work in the fields of weapons, equipment, and war zones. This will go a long way to help you win the war and destroy your enemies in the future.