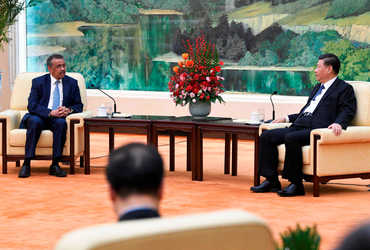 – were going to investigate the origin of Corona

International experts who wanted to travel to Wuhan province of China to see where and how the corona virus originated by China. The World Health Organization (WHO) has expressed concern over the issue.

The World Health Organization (WHO) said on Twitter that it was “worrying” that China had not allowed international experts to travel to Wuhan to see how the corona virus originated.

It is worth remembering here that the first case of corona was reported in early 2020 in Wuhan province, China. A Wuhan doctor also reported that the virus originated in Wuhan, which was later found dead in a suspicious condition. Initial reports also stated that the virus had spread from Wuhan meat market. The highest number of cases were also in Wuhan.

However, China has consistently denied the report. The entire world, including the United States, blamed China for the corona virus. However, China did not consider that report a world poll. China blamed several other countries including India for the corona virus. The World Health Organization (WHO) also announced at the time that it was sending representatives to China to investigate. But China is not ready to allow this. That is why the needle of suspicion towards China is constantly pointed out.

The tunnels excavated in the dense forests of southern China are home to thousands of bats. The bats are being blamed for the corona virus, but no investigative teams outside China are allowed to enter its territory. Corona killed 1.7 million people in the world in the last year and a half, but China does not care.