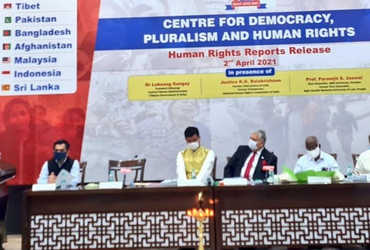 – The condition of religious minorities as well as minority Shias and Ahmadis in Pakistan is bad.

The Center for Democracy Pluralism and Human Rights has released a report on human rights in Pakistan, Bangladesh, Afghanistan, Malaysia, Indonesia and Sri Lanka, including Tibet. This report has been prepared keeping in mind the civil equality, their dignity, justice and democracy in all the countries. The report was compiled by a team of academics, lawyers, judges, media personnel and researchers. It mentions the human rights situation in India’s 7 neighboring countries, which is as follows.

According to the report, the status of religious minorities as well as minority Shias and Ahmadis in Pakistan is also very bad. It is also an offense under Section 298B-2 for Ahmania Muslims to use the word Azaan. Furthermore, Pakistan’s legal framework is not in line with international citizens and political authorities. Religious minorities – Hindu, Sikh and Christian women have high rates of kidnapping, rape, forced conversions etc. Religious minorities are also intimidated and threatened.

According to Abul Barkat, a professor at Dhaka University, 2,30,612 people have been forced to flee every year in the last four decades. Its average daily is 632 people. If the migration continues at the same pace then no Hindu will survive after 25 years. In 1975, the term “secularism” was removed from the constitution and the verses of the Quran were retained, and in 1988 Islam was declared the religion of the country. In addition, the demographics of the Chittagong Hill Tracts were also systematically altered. In 1951, 90 percent of the population was Buddhist, down from 55 percent in 2011.

According to the report, China is trying to hide the human rights situation in Tibet through various sanctions. China is also trying to destroy Tibet’s social, religious, cultural and linguistic identity.

Malaysia has a discriminatory law in favor of Bhumiputra. The rights of gay minorities are also being violated there.

The report expresses concern about human rights and discriminatory policies towards minorities in Afghanistan. According to Afghanistan’s constitution, only a Muslim can become the country’s president and prime minister. According to the 1970 census, there were 700,000 Hindus and Sikhs, but now only 200 families remain.

One lakh people lost their lives and 20,000 Tamils ​​went missing during the 26 years of civil war in Sri Lanka.

Religious bigotry and intolerance has increased over the years in Indonesia. The major religious Islamic leaders of the country were also named in the 2002 bombings in Bali. In 2012, Balinaguru witnessed several incidents against religious minorities, including attacks on Hindus.