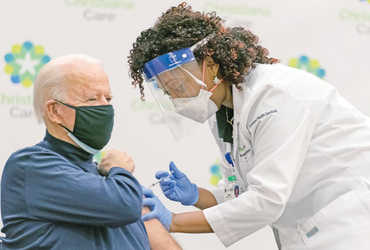 Transport ministers of France and Britain are in talks to open the border to bring back several European trucks stranded on the British border due to sanctions imposed by France, amid fears that Britain and France may have a more corona virus Infectious new strain can be found.

Many countries have severed tourism links with the UK over fears of new mutant outbreaks. Fearing a new mutation in the Corona virus, France has closed its border with Britain, leaving around 1,500 trucks stranded.

Ministers of both governments are in talks to resume movement at the border by conducting a collective test of truck drivers. These truck drivers will be able to reach home on Christmas when traffic starts. Home Minister Preeti Patel said the test could be carried out expeditiously but the transport ministers of the two countries were in talks to decide the terms.

Maria said the new virus is unlikely to affect the vaccination process. There have also been cases of corona in Antarctica, which has so far been free of corona. A Chilean research base has reportedly infected 36 people. All research projects to stop the spread of corona infection in Antarctica have been halted as research from scientists around the world has been disrupted.

On the other hand, US President Joe Biden and his wife Jill Biden have been publicly vaccinated against Corona. The president was vaccinated by Tbe Massa, head of employee health services and nurses at Christina Care Hospital. Biden tweeted that he was vaccinated against Corona today. On the other hand, Congress and the Senate have approved a $ 900 billion relief package and sent it to President Trump for signature.