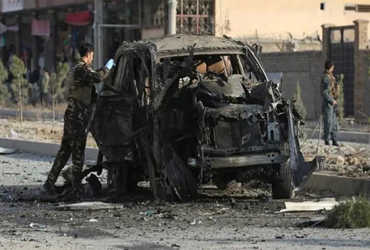 A bomb blast near Afghanistan’s capital Kabul killed at least nine people and injured more than 20 others. Afghanistan’s Interior Minister Masood Andrabi has confirmed the explosion. He said nine people were killed and 20 others injured in the blast in Kabul.

Afghan security forces have cordoned off the area in Kabul where the explosion occurred. Earlier in the day, three people, including a sub-provincial governor, were killed in bombings and shootings in Kabul on Tuesday. The attack is seen as a new link in the series of violence in Afghanistan. The blast continues negotiations between the Taliban and the Afghan government and efforts are on to reach a peace deal.

Kabul was hit by a rocket on 12 December. One civilian was killed and another was injured. According to the Afghan Interior Ministry, two shells were fired in the premises of Hamid Karzai International Airport in Kabul. A bomb exploded at an Iraqi police recruitment center in Kisak, west of Kabul.

It is noteworthy that an organization linked to the Islamic State of Afghanistan has carried out similar attacks in the past. More than two dozen mortars were fired last month. More than half a dozen civilians were killed and more than 30 were injured.