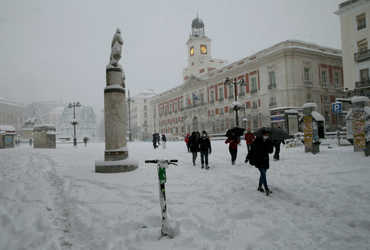 Madrid, Ta. 9
A blizzard hit Spain. Eight inches of snow fall made public life dislocated. Cities including the capital Madrid were forced to issue red alerts. Many were trapped along the way. The army was reduced to being called as a rescue team.
There was heavy snowfall in Spain. Several flights had to be canceled due to the blizzard. The train was also canceled. Many passengers were stranded on the road, at airports or at train stations. The stranded people were caught by the rescue team and assured to be shifted to a safe place soon.
Spain’s official meteorological department issued a red alert in cities including Madrid. More than a thousand vehicles were stranded on the streets of Madrid alone. He was forced to help the army. The Met Office officials advised people not to go out and more snowfall was forecast for the next four hours.
The head of Madrid’s emergency department said about 1,000 vehicles were trapped. In addition, about 40 major and minor roads in Spain have been closed due to snowfall. The cities were covered with snow up to eight inches. Inland areas also received 15 to 18 inches of snow.
All international flights to Madrid have been canceled, the airport authority said in an official statement. It was decided to cancel a passenger train connected to cities other than Madrid and a rescue operation was launched for passengers stranded in the train. Spain’s emergency department officials described the time as “very difficult”. Eight to 12 inches of snow fell in Spain, disrupting public life. The whole of Spain was covered with a sheet of white snow.