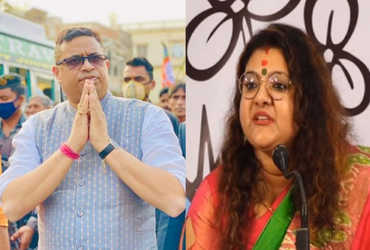 Mamta Banerjee’s rule of Amit Shah has begun in West Bengal. Many TMC leaders have joined the BJP. Then BJP started coming to TMC. It was started by Sujata, wife of BJP MP Soumitra Khan. Sujata left the BJP on Monday and joined the TMC. Angered by his wife’s decision, BJP MP Soumitra Khan is preparing to divorce her. Soumitra Khan will send a divorce notice to his wife Sujatha. At the same time, the guards who were deployed to protect Sujatha’s house have also been removed.

It is learned that there were differences between Soumitra Khan and Sujata for the past several days. Now the fight behind is open. On joining his wife from BJP to TMC, Soumitra Khan said, “It is true that there are differences in our family.” There may be quarrels in the family, but it is not fair to politicize it. I am sad that he lost his job because I joined BJP. I am also sad that Sujata joined TMC for her political ambitions.

BJP MP Soumitra Khan said that he has taken a good decision, but for me the party is important and Modiji is responsible for our victory. The Youth Front needs us. BJP is not a family party. AAP was honored as the wife of a BJP MP. You voted me and I also have a winning partner. TMC may break up families but now I free Sujatha with my name and surname.