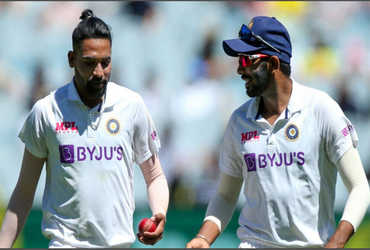 Even on the fourth day after the third day of play in the ongoing third Test against Australia, the atmosphere became tense as spectators fielded Indian fast bowlers Siraj and Bumrah, who stood for fielding near the boundary.

From a stand in the audience, Siraj was shouted as ‘Big Monkey’. While there was a boom for Bumrah with insults like ‘Brown Dog’. For the second consecutive day, Siraj and Bumrah approached the umpires and complained of the stadium being full of anti-social elements.

Police arrested six such spectators outside the stadium. The incident happened when Siraj was fielding at a magnificent leg boundary. These viewers were shouting insults and insults against the mother and sister who cannot be written here.

The Cricket Board of India (ICB) had lodged a complaint with the Australian Cricket Board (ACB) regarding the issue. The report has reached the ICC. Match referee David Boone and on-field umpires also acknowledged that such an incident had occurred and urged the Australian Board and ICC to take strict action in writing.

The atmosphere became tense for a while when Siraj and Bumrah complained to the umpire. Along with the Indian players, Australian batsmen also joined in to express the displeasure of the audience.

Captain Rahane introduced umpire Paul Rifle with outrage during the game, which was closed for eight minutes. Shaun Correll, head of the Australian Cricket Board’s security department, has assured the Indian board and the team that we have taken such an incident seriously.

And after receiving the ICC report, these viewers will be prosecuted under the anti-harassment sections. These spectators will not be able to go long to watch any match and other police will be punished. New South Wales Cricket has also apologized to the Indian team.