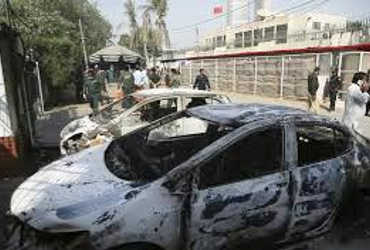 – Strikes continue only when economic cooperation with China is increasing

Imran Khan’s government was facing difficulties when there were violent attacks on Chinese civilians in Karachi, when Pakistan was expanding economic cooperation with China and concluding an agreement on a Chinese naval base and deep sea port in Gwadar Was.

Baloch citizens who were opposed to Sino-Pakistan cooperation were now attacking Chinese people in urban areas. Recently seven Pakistani soldiers were also killed in Balochistan. Thus, the tension of Imran Khan was increasing.

Seeing the anger of the Baloch people, Imran Khan now had to build a barbed wire wall in Gwadar. According to a report, the Baloch rebels have now changed their style of attack.

In the past, these people attacked only in rural areas. Now they have launched attacks on the Belt and Road project, Chinese investment and commercial centers with Chinese citizens in urban areas.

On Tuesday, a Chinese citizen and his accomplice were badly attacked in a motor car showroom on the outskirts of Karachi. Still last week, a Chinese citizen’s car was blown up in a posh area like Clifton, Karachi. The car was parked outside a restaurant in the Clifton area. The Indus State Revolutionary Army claimed responsibility for the attack.

The Revolutionary Army of the Indus country issued a statement alleging that China and Pakistan are forcibly occupying our lands on the pretext of a Sino-Pakistan Economic Agreement. We will keep attacking them.

It can be noted here that China is investing ₹ 150 billion in Pakistan under a bilateral agreement. The agreement is known as CPEC and is an important part of Chinese President Jinping’s ambitious Belt and Road project.

The people of Balochistan are upset with this agreement and are now attacking Chinese civilians and Chinese schemes in the name of Sindh Revolutionary Army. After the rural areas, now the army was also attacking the urban areas.