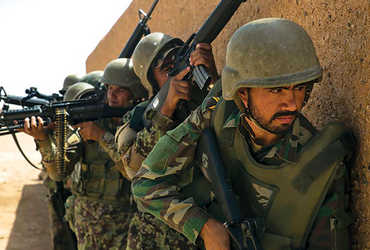 On the one hand, talks are underway between the Afghan government and the Taliban in Doha, Qatar’s capital, to bring peace to Afghanistan. On the other hand, violence also continues in Afghanistan. A bomb blast near Afghanistan’s capital Kabul killed at least nine people and injured 20 others. The attack targeted MP Haji Khan Mohammed. Amidst all this, the Afghan army is also continuously taking action against the terrorists. Within the last one week, the Afghan army has carried out large-scale operations in several areas in the Kandahar region. During which 74 Taliban militants have been killed.

According to the Afghan Ministry of Defense, violence has increased in the Kandahar region in the last few days. However, in all these places, the Afghan army is responding to the Taliban. 74 militants have been killed in clashes between the military and the Taliban. According to Defense Ministry data, the army has killed a total of 82 Taliban militants in different parts of the country in the last one week.

On the other hand, there have been terrorist attacks in Afghanistan at several places in a week. Many people were killed and many others were injured. A bomb blast near the northern city of Mosul killed at least nine people and injured dozens, officials said. On Tuesday, a car bomb exploded at an Iraqi police recruitment center in Kisak, west of Kabul. In which the deputy governor and his assistant were killed