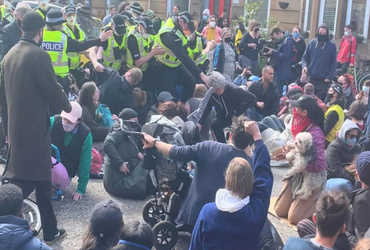 On Thursday, two Indians were detained by British immigration officials in Glasgow, Scotland. Hundreds of people took to the streets to protest against the detention. The van carrying the Indians was taken home. The van and its immigration officers remained stranded for eight hours. Eventually, the police saw the situation deteriorating, leaving the two Indians to investigate against them. Scotland’s First Minister Nicola Sturgeon called the immigration department’s action “unilateral” and “wrong”.

However, according to immigration officials, the two Indians arrested, Sumit Sahadev and Lakhbir Singh, are both illegally residing in Scotland. Sumit is a cook, while Lakhbir is a mechanic. Both emigrated to Britain 10 years ago, but later settled in Scotland. British immigration officials noticed a crowd gathering around him and sought the help of the local police.

The Scottish Police defended the decision to release two Indians detained by UK immigration enforcement, saying they were released in the interests of security, public health and detention as well as all those involved in subsequent protests Was. Large crowds are currently banned in Scotland due to Corona.

The incident took place in the Parliamentary Electoral District of Sturgeon, the First Minister of Scotland. Sturgeon’s Scottish National Party won the most seats in the Scottish Parliament election last week. Sturgeon said he had lodged a complaint with the British government about the incident. And said to avoid such a situation in future.

The UK Home Office, which drafted immigration rules for the entire United Kingdom, said it would strike with plans to expel illegal immigrants from the country.