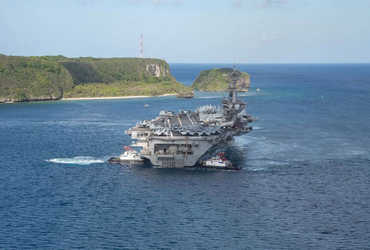 Between Donald Trump’s departure in the US and the accession of Joe Biden, China has increased pressure on Taiwan. Dragons want to capture the island nation, but in the meantime, the US has presented a direct challenge by deploying warships in the South China Sea. On Sunday, the US military said that the U.S. A group of aircraft warships led by Theodore Roosevelt entered the South China Sea to ensure freedom of navigation, amid growing tension between China and Taiwan, raising concern in Washington.

The US has expressed concern about Chinese military pressure on Taiwan, saying such threats are a threat to regional peace and stability. The United States is concerned with the PRC’s efforts to intimidate its neighbors, State Department spokesman Ned Price said on Saturday. In a statement, he urged Beijing to end military, diplomatic and economic pressure on Taiwan to have meaningful dialogue with democratically elected Taiwanese representatives.

“We stand with friends and colleagues to advance shared prosperity, security and values ​​in the Indo-Pacific region,” he said. He said that the United States was supportive of the commitments made in “Three Communications”, “Taiwan Relations Act” and “Six Assurances”. “We will help Taiwan maintain adequate self-defense capabilities,” Price said. We are committed to Taiwan and will contribute to maintaining peace and stability in Taiwan’s maritime and regional waters. “